HIDmaker Software for USB: Use YOUR Favorite Compilers

We know you have strong feelings about what programming language is best for you when you want to make software for USB. We understand that you may have existing source code that you have developed and extended for years. You don't want to have to lose that code and start over.

We don't think you should have to start over, either.

For those reasons and more, we make our products able to let YOU choose the programming languages you want to work in. We don't lock you in to some proprietary programming scheme, or only provide you with some example program that barely works in only one programming language, like those semiconductor companies do.

For both the PC and the PIC side, HIDmaker generates complete, ready to compile and run source code, including project files that you can immediately load into your compiler's Integrated Development Environment, so the compiler can find all of the files in your project.

Both HIDmaker FS 2 and HIDmaker 32 let YOU make the choices that are right for you!

Here is a screen capture of the page of the HIDmaker 32 wizard, where you actually choose the "code generators" for both the PIC side and the PC side.  We refer to "code generators" instead of compilers right now, because you can see from the image above that there are e.g. several code generators for the Microsoft C# compiler -- one generates C# code for the .NET "WinForms" framework, and the other generates C# code for the newer Windows Presentation Foundation (WPF) framework.

Each code generator creates a complete, CUSTOM project for a particular compiler, along with a project file that tells the compiler or Integrated Development Environment (IDE) where all the files are.  Each code generator places its code in a separate subdirectory under the main project directory you have created for this HIDmaker project.

HIDmaker 32 generates only C code on the PIC side, currently for Microchip compilers only.

For a detailed description of the code generators supported by HIDmaker 32, see the HIDmaker Supported Compilers page. 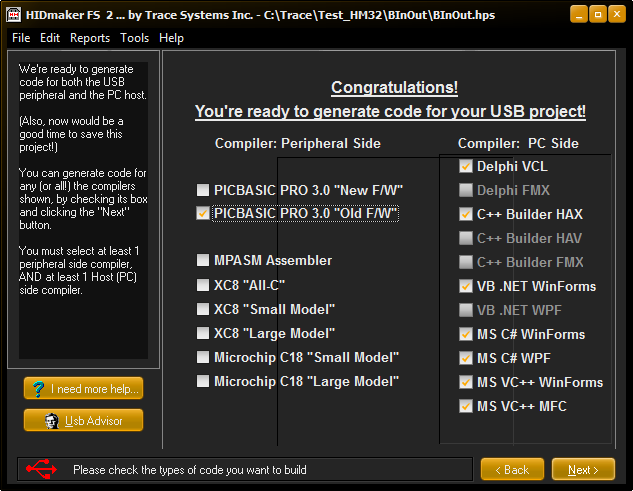 Here is a screen capture of the page of the HIDmaker FS 2 wizard, where you actually choose the "code generators" for both the PIC side and the PC side.

With one exception, most of the HIDmaker FS 2 PIC side code generators create a mixture of high level language code for the files YOU will work with, and fast assembly code for the USB library code that you shouldn't modify anyway.  Doing this allows us to support some non-Microchip compilers as well as Microchip compilers, and makes the packing and unpacking operation about 4X faster than straight C code.

The one exception is Microchip XC8.  Microchip has seen fit to make some changes to their XC8 compiler that are unsafe for the mixed C / Assembly framework we use for the other PIC compilers.  This has forced us to make our XC8 code generator in HIDmaker FS 2 to generate the same straight C code framework that HIDmaker 32's XC8 code generator does.

For a detailed description of the code generators supported by HIDmaker FS 2, see the HIDmaker Supported Compilers page.

To get an even more value from your compilers, download our free guide to the tips, techniques, strategies, and mind set that will turbo charge your USB development!

Next: Customize Your Code >>